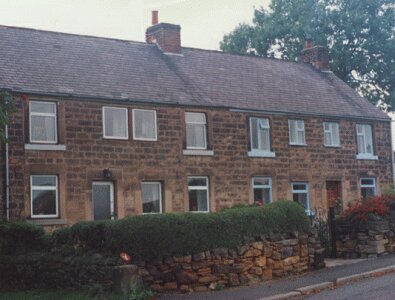 Retrace your steps back up Temperance Hill and on the left you will see a row of stone cottages. These were built at the turn of the century and are some of the oldest remaining dwellings in Woolley Moor. Originally they had no indoor sanitation or plumbed in water. Residents had to fetch their water from the well in Well Lane just up the road. At the rear of the first two cottages is a small brick building, originally a stocking factory. After the workers had finished their stockings they would dye them with damson juice from the fruit in the nearby orchard. It was said you could always tell a resident of Woolley Moor by the colour of their stockings!

At the rear of the cottages lives Mr and Mrs Harold Large. Mr Large has lived in Woolley Moor for over 40 years growing and showing dahlias, often at as many as 12 shows a year. He has a great collection of trophies and his flowers can be seen at the Woolley Show which takes place in the field adjacent to the New Napoleon Public House each year on the last Saturday in August. Mr Large loves talking about his hobby (he also grows prize winning leeks and onions) and is most interesting to listen to as a source of village history as well as a horticultural expert! Incidentally do notice the wrought iron gate at the entrance to the Larges’ drive. They were erected as a memento of their golden wedding!