After leaving the stream turn left at the junction of Beresford Lane and Temperance Hill. This road runs from Ashover New Road to the junction with the Matlock Road by the New Napoleon Inn. The road originally had four names. Beginning at the top of the church it was called Church Lane, then The Cutting, next Fletcher Hill and the bottom part, named by strict chapel goers who had signed the pledge, was Temperance Hill! These must have been the most vociferous group as this was the name adopted for general use! 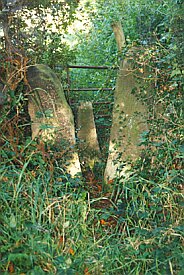 Look for the stone stile in the wall opposite the Give Way sign, worn on one side by bottoms rubbing on it as people squeezed through (called a squeeze stile).

At the top on the left, view the old school and present day Handley Church, originally named St Mark’s School/Church.

The School was founded in 1869 by the Rev J Oldham B.D., first vicar of the Parish of Clay Cross, in the year before Fosters Elementary Education Act made state education compulsory. The site was given by Gladwin Turbutt Esq. Of Ogston Hall and the school was opened on Easter Monday, April 18th, 1870. The cost of the school/church was £317 1s 6d. The foundation stone is inscribed St. Mark’s School Church Handley – God be praised! It was laid on April 26th, 1869.

The first available record is in the logbook dated 15th January, 1875 when Miss Mary Ellen Fairbanks opened the Spring term with 24 children and “found them very obedient but very backward”.

At one time 90 pupils were taught in the building divided by partitions into three rooms which were pushed back for joint activities and for church on Sundays. The children were segregated for play times and the school had no indoor sanitation.

In spite of these drawbacks, many present residents (but by no means all) of Woolley Moor recall very happy memories of schooldays. Several recall the school garden in the triangular patch of land opposite – each child had their own small plot to cultivate. There was a fish pond and even bee hives where the headteacher used to gather honey! (In between teaching and cleaning the school!)

The road that runs alongside the school is the Ashover New Road built after 1837 to connect Ashover to the north Midland Railway at Stretton, to take stone from the quarries and passengers to the Hydros. It was built from the Toll House at Woolley Moor to the Junction of the B6014 at Stretton near to the Toll House there.

Memories of the station are unforgettable, visits to Blackpool illuminations for half a crown (12.5p), leaving at four in the afternoon and returning at two the next morning! Up for work as usual! The railway was also used to take milk to Sheffield. Woolley farmers used this 7.30 am milk run, taking their milk in churns on horse trailers to the station each day. The station buildings can still be viewed alongside the B6036 towards Stretton.