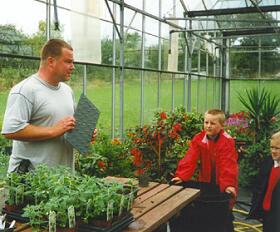 If you leave the Recreation Ground between the houses by the children’s playpark area you will enter Badger Lane. We do not recommend that you turn left if you are accompanied by groups of children as it leads to a very dangerous corner but we would like to draw your attention to buildings of interest in that area.

On the corner of Badger Lane and Ashover New Road is the Toll Bar Cottage where travellers used to have to pay a toll to travel on the old coaching road to Stretton (before Ashover New Road was built). Originally there was a half door in the front where the toll collector would stand and there was a gate across the road.

Round the corner, on Ashover New Road is the business of Woolley Moor Nurseries.  The business started out in 1930 as Riley’s Nurseries located on Mansfield Road at Alfreton, breeding and dispatching new varieties of chrysanthemums. Chrysanthemums that started life in Woolley Moor have been grown in about 18 different countries worldwide including, America, Australia, New Zealand, South Africa, Canada and British Columbia. The  Riley’s moved to the Woolley Moor site in 1947 until 1996. 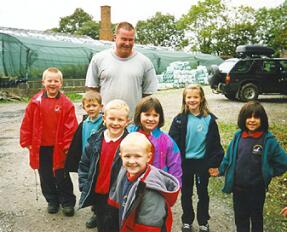 The Nursery’s new owners, the Mansfield family, moved into the premises in 1997 and changed the name to “Woolley Moor Nurseries” firmly placing the name of Woolley Moor in the minds of customers as far away as Japan.  Still loyal to the chrysanthemum grower, the nurseries now stock a wider variety of plants, including dahlias, a huge variety of patio and basket plants, perennials and herbs.  Growing acres of cut flowers (dahlias and chrysanthemums) there’s always an abundance of colour from August through to the first frosts of winter. The premises is a Caravan Club registered site, making it an ideal base to explore the Woolley Trail and surrounding countryside at a more leisurely pace.   If you wish to learn more about this business please contact Russ Mansfield on 01246 590320.

Back to the beginning