George William Fox, was born in Woolley Moor on 15th February, 1880 and lived in the village all his life. Eldest of nine children of Samuel Fox who kept ‘Napoleon’s Home Inn’, he was very involved in the life of the community. For many years he was treasurer to St. Mark’s Church, superintendent of the Sunday school, clerk to the Parish Council and Handley School Governors and secretary to Woolley Moor Vegetable Society. He was also involved with the local football club, Woolley United, as treasurer and the cricket team as an occasional player. 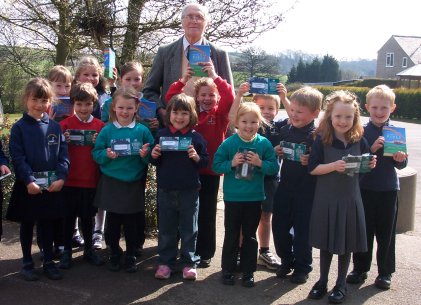 Upon his death in 1960 he left £100 in his will to provide bibles for the Sunday school children who attained the age of 11 years. Unfortunately over the years the number of children in the village dropped and eventually the Sunday school closed. For several years the fund was suspended until it was suggested that bibles be presented to children at Handley School when they went up into the junior class. This continued when the school changed to new premises and became Stretton Handley Church of England (Controlled) Primary School, when his son, Mr Sam Fox presented the bibles. His grandson, Mr Ernie Fox now continues the tradition.