Well done to our four Year 5 mathematicians who represented the school at this year’s Junior Maths Challenge hosted by Tupton Hall School. 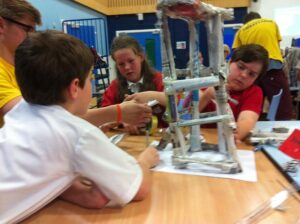 They faced challenges such as solving mathematical acronyms and anagrams, building a structure, maths logic problems and a memory drawing task. They came first in the memory drawing test and also did well in the tower building challenge, gaining the second highest combined points score for weight bearing and height.

The children were able to let off steam in the Gym by taking part in some more active problem solving and were given the chance to work with children from the other schools. This fantastic, well organised, event was ably lead by Tupton Hall’s Sixth Form Student Ambassadors; we look forward to taking part in next year’s challenge.