Our first bird box and camera kit was purchased using Friends of School funds and was received in school on 30th March, 2007. The Gardenature kit, which includes a B&W camera with IR illumination, was purchased through TAG learning. With IR (infra red), we are able to view inside the box in poor light conditions and at night, without disturbing the birds. The following year, we took part in the Derbyshire Schools’ Birdcam Project and acquired an additional nest box from Gardenature, this time fitted with a colour IR camera.

The bird box and camera kits, manufactured by Gardenature, include a high quality hardwood nest box which is fitted with a quick release camera and microphone. The boxes were also supplied with a combined 30m video/audio (RCA) and power cable which can connect directly to audio visual equipment such as a TV or data projector. We also purchase a DVD Maker video (RCA) to USB adapter with the necessary software to connect it to a computer.

The B&W bird box was fitted to the south-eastern side of the school about 3-4m off the ground at the beginning of April 2007 and nest building commenced almost immediately by several species! Competition for the box was such, that we were forced to fit a 25mm homemade hole adapter to stop a Tree Sparrow entering the box and destroying eggs which were being laid by a Blue Tit!

The Colour bird box was fitted to the north-eastern side of the school around 3m off the ground.

The cameras are connected to computers which are kept on when we are uploading images to the website. We use Fwink, a freeware webcam application, to capture still images from the nest box and upload them to the school web site every 15 seconds. This provides an almost live view of activity in the box. Although Fwink is extremely easy to use, we found it often froze and hence we purchased i-catcher Wildlife, which proved more reliable. (A newer version of Fwink is now available and initial testing has shown it to be much more stable). A basic birdcam web page, which refreshes the uploaded image every 10 seconds, is provided here to modify as you wish. To save, right-click on the link and save the target html file.

We have also used Yawcam which is another amazing free piece of software. With Yawcam we are able to simultaneously upload images to the web site and provide a live video stream across the school network and onto the Internet. It also has a motion detect option (in common with i-catcher) which can be used to restrict image capture to when there is activity in the box.

When we want to record high quality video footage with sound, we use PVR plus which was supplied with the video to USB adapter (no longer supplied but can be downloaded here). Other webcam/video capture software could be used eg Windows Movie Maker which is part of Microsoft’s XP operating system. However, the PVR software is easy to use, particularly as it can be setup to save automatically recorded video to a chosen location (eg on a Server) with a filename uniquely date and time stamped.

NB: it is not possible to run the different webcam/video capturing software concurrently.

Good quality, inexpensive, ready made bird box camera kits are available from a number of sources and make a great purchase for school PTAs. A number of our parents commented that they felt it was one of the best purchases that the PTA had made, particularly as they could also view the pictures from home through the school web site.

Kits may include B&W or colour high resolution cameras, ideally with a microphone included as this adds to the experience. Both types are available with IR illumination to allow viewing at night or in poor light. The colour kit without IR tends to give an image with better colour saturation compared to that with IR.

Cameras are usually supplied with a long video (RCA) cable (allows connection to audio visual devices either directly or via a scart socket adapter) which also includes the power cable. “Wireless kits” are available but be aware power still needs to be supplied to the camera, usually with a cable, and the wireless range quoted may be less depending on whether obstacles are blocking the signal.

If you wish to view the images on a computer you will also need a video (RCA) to USB adapter or a video capture card.

Just because you have a great brand new home for your birds, it doesn’t mean they are going to use it – that’s nature! However, there are several things you can do when installing your box to maximise your chances. The RSPB and bird box manufacturers, supply comprehensive guides for installing nest boxes.

Generally, the box should be situated at least a couple of metres above the ground and away from ledges and bird feeders to deter predators. Ideally the box should face in an easterly direction, away from prevailing winds and direct sunlight to prevent the inside of the box getting overly wet during bad weather or overheated during good weather. You will also get better sound if the wind isn’t blowing across the entrance hole and the sun isn’t shining directly through the hole causing high contrast conditions which the camera might find hard to cope with. A clear flight path to the entrance hole is also often preferred. 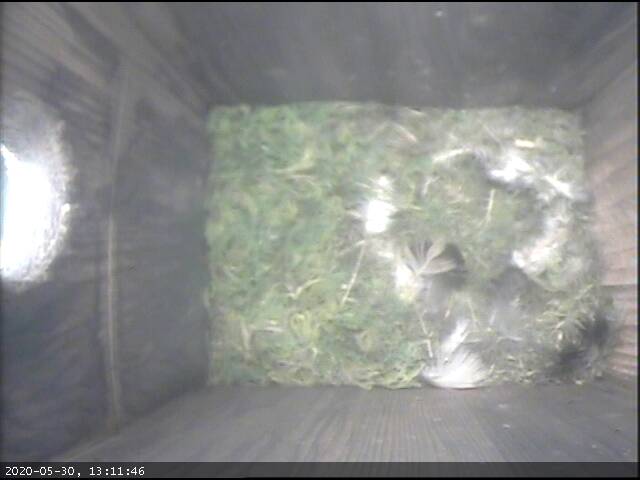